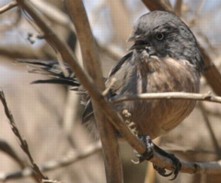 The wrentit is a little native bird of California. Its head, beak, and eyes resemble those of a tit, but its long tail is held at almost a right angle to its body like a wren. It is the only American member of the mostly Asian family of babblers (Timaliidae). How it got here is a mystery.

Found from northern Oregon to Baja California, the wrentit is a common resident west of deserts, along the coast and in the western foothills of the Sierra Nevada. Its

habitat is the low, dense, stiff brush of the chaparral, coastal sage scrub, and forests with dense shrub understories. It can also be found in the mesquite thickets east of the Anza-Borrego Desert.

The wrentit is a small brown song bird with fluffy olive-brown or dark brown feathers on its back, and paler or pinkish brown feathers with faint streaks on its underside. Standing out against its pale gray face, its eyes have a pale whitish-yellow inner area with a darker outer rim. The brown bill is stubby and straight like that of a chickadee. The wings are short and rounded, and the long tail is rounded as well, often held up at an angle. Males and females, as well as immature birds look alike. They get to be about 6 inches (14-15 cm) in length and weigh about 0.46 to 0.56 ounces (13-16 g)

Not easily spotted in the dense growth of the chaparral, the wrentit is usually heard before its seen. It has very clear and sharp, whistled "pit" notes that repeat and become more and more rapid, followed by a descending trill. The song has been compared to the sound a bouncing ping pong ball makes. Males and females sing all year to advertise their territory and to communicate with each other. When another wrentit comes on their territory, the owners will quickly fly up to them, their head feathers erect, and sing or scold. They also make a catlike purr.

Wrentits mate for life and are known as monogamous. They keep in close contact with each other, preening each other, and huddling close together when roosting. They spend all of their adult life within the territory they choose in their first year, and rarely move farther than 1312 feet (400 m) from the site where they were born. They will fly from bush to bush with short, choppy flights due to their small wing size, and hesitate to cross open spaces more than 30 to 40 feet (9 to 12 m).

Their nests are built in dense shrubbery like Ceanothus, Manzanita, coastal sage or Coyote Brush. Shaped like an open cup, it is made of grasses and bark strips held together with insect silk, and lined with soap plant or grass. The outside is sometimes decorated with lichen to camouflage it. The nest is built in the crotch of coastal sage or coyote brush. Old nest materials are often reused to make new ones.

Wrentits usually lay 3-5 whitish blue or green eggs in the summer months. Both parents will incubate the eggs for 15-16 days, which is considered long. The chicks are born naked, blind and helpless, like most song birds, but are old enough to leave the nest in 12-22 days. Both parents feed the fledglings for almost 30 days. The young birds will stay in their parents territory until the following spring. A wrentit can live as long as 12 years.

Wrentits are omnivorous, and forage for insects and spiders that it gleans from bark of shrubs and trees. It also eats berries, small fruits and seeds. The young seem to be fed only insects. Wrentits rarely forage on the ground.

Threats to the wrentits come from jays and snakes, which feed on the young, and feral cats and domestic animals. Another threat is habitat destruction as more people move into the chaparral. As chaparral and underbrush is cut down, the wrentits habitat is segmented into isolated areas. Hesitant to fly over open spaces make the wrentit populations vulnerable to extirpation (local extinction).

"the wrentit is often found in chaparral, and coastal scrub", http://www.laspilitas.com/California_birds/Babblers/Wrentits_in_your_
garden.htm, 12/9/05