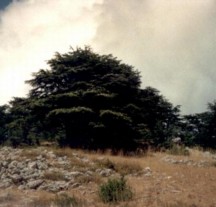 The Lebanon cedar is originally from Asia Minor. It is native to Lebanon, Syria and southern Turkey. It can be found in the Jebel Alaonite Mountains in Syria and Lebanon, and the Taurus Mountains of Syria and southern Turkey. Rare in Lebanon, only 5000-7000 acres (2000-3000 ha) of forest remain in small patches across the country. However, it is still plentiful in Turkey. There are only three species of Cedars in the world: the Lebanon cedar, the Deodar of the Himalayas and the Mount Atlas Cedar Large forests of Lebanon cedars of ancient days no longer exist. But because of its beauty and history the Lebanon cedar has been planted throughout the world. A large and beautiful tree grows on Martha's Vineyard in the Polly Hill Arboretum.

The first thing you notice about the Lebanon cedar is the large wide-spreading horizontal branches. The top of the tree is broad and flattened in a mature tree. In dense stands of trees they grow straight and narrow, but when standing alone, its lower branches spread out horizontally over a large area and rest on the ground. The cedars can grow 80 feet (20 m) tall and spread out from 30-50 feet (9-15 m). They grow very slowly. The oldest tree is more than 1000 years old.

The needles of the Lebanon cedar look like those of the Larch, except that they are evergreen. The needles are grouped in tufts of 30-40. They are about 1/2-1 1/2 inches (1.5-3.5 cm) long, stiff, and four-sided, tapering towards their points. They are a dark blue-green color, and stay attached to the tree for 2 years. When they fall to the ground they don't decay for several years. The leaf litter on Mount Lebanon is 1 foot (.3 m) thick.

The Lebanon cedar doesn't flower until it is 25-30 years old. The flowers, or catkins are unisexual, with both male and female flowers on the same tree. The 2-inch catkins are reddish in color.

The cones become 4-5 inches (10-12 cm) long and stand up straight on the branch. Young cones are light green in color. Female cones are barrel-shaped and dull brown. They mature in their second year. The scales are broad but thin, and each scale has 2 broad-winged seeds. The wings allow the seeds to be carried away from the parent tree by the wind. The seeds ripen in August to October, but are not shed until spring. When the scales fall off, a slim, central candle is left on the tree.

The history of the Lebanon cedar's decline is a long one. About 4,700 years ago, the Epic of Gilgamesh's Forest Journey tells the story of Gilgamesh's need for timber to finish his magnificent city. He turned his attention on the forest near southern Mesopotamia, which was protected by the deity Enlil. Enlil had forecast that once humans entered the forest, they would destroy all the trees, the 'divine beauty'. A great battle broke out between the demigod guarding the forest and the humans. Human greed won and the forest was completely stripped of its trees, leaving nothing but bare ground.

The fate of the cedar forests was sealed. The Phoenicians needed timbers for their ships, which made them the first sea-trading nation in the world. The Roman Empire's expansion into Syria had more harmful effects on the cedars. It wasn't until the Emperor Hadrian put up boundaries around the remaining forests and declared them his Imperial Domain, that the destruction of the forests was slowed.

According to the IUCN Red List of Threatened species, Cedrus libani is listed as LR/nt. It is at a Lower Risk, meaning that it doesn't fulfill the criteria for any of the categories of Critically Endangered, Endangered or Vulnerable. The designation "nt" means it is near threatened, and is close to qualifying for Vulnerable. It is not threatened in Turkey, although it is heavily threatened in Lebanon and extremely restricted in Syria.

Today the large cedar forests of the past are gone, replaced by a barren, dry land. When climax forest are cut, they are replaced by scrubby growth, most of the soil is lost, and water can't be retained. The Cedrus libani in Lebanon is limited to only twelve, separate stands. One of these stands is in Jabal el-Barouk, located on the slopes of the central section of the Mount Lebanon chain. It is the largest self-regenerating stand in Lebanon and supports some wolves and wild boar.