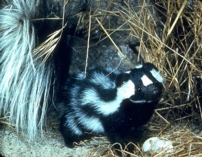 The western spotted skunk is an animal that lives in the chaparral biome of southwestern California and in areas in between Costa Rica and British Colombia, Canada. It prefers the desert, woods, brush land, and rocky terrain. It avoids the dense forests and wetlands. This animal can live in a variety of temperatures. The western spotted skunk builds a den out of a hole in the ground and lines it with leaves. Occasionally a spotted skunk will live in a hollow tree.

The spotted skunk is an animal that looks like a cat, only wider and not as high above the ground. It is black with many white spots, and has a triangular white mark on its forehead. All skunks have a different pattern from each other. This is used to tell the difference between skunks. The spotted skunk is the smallest type of skunk. It's size ranges from 21 to 25 inches long, including the tail. This type of skunk is taller than most skunks with long legs, although it is not very long. It moves like an animal related to a cat. A spotted skunk has larger carnassial teeth than other skunks. These are used to slice through an animal's flesh. Also, the spotted skunk has sharp claws for climbing trees and digging for larva.

The western spotted skunk mates in October and gives birth in March or April the following year. However, both sets of birth times vary due to the fact that female skunks can delay the birth date until the food is plentiful. Mother skunks give birth to about 6 pups at a time. A skunk's gestation period is 50-65 days, longer with implantation. They reach sexual maturity at 4-5 months. Their birth interval is 2 years. For the first 8 weeks baby skunks feed off their mother's milk. After they have been weaned, the mother brings her young live prey, and eventually teaches them to hunt for themselves. A pup's father does not play a huge role in its life cycle, staying solitary in the summer, and occasionally sleeping with the mother and pups in the winter. Skunks do not truly hibernate. The pups have musk glands when they are 1 month old. They reach full size at 4 months. Skunks live up to 10 years in captivity.

A normal spotted skunk's diet in the winter consists of mainly rats and other rodents. However, in the summer, the skunk's diet changes to more vegetation and insects. The skunks normally eat small mammals along with these. In the autumn, a skunk adds fruit and berries to its diet. In the winter, the skunk goes back to its original favorite prey, small mammals.

The spotted skunk's prey is mainly small mammals such as rats and mice. The spotted skunk has no normal predators as it shoots its musk to defend itself. However, great horned owls and bobcats have been known to attack them. Skunks are especially helpful to humans by catching rodents quite frequently.