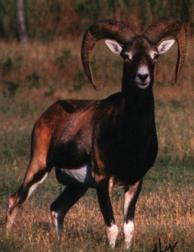 The mouflon is thought to be one of two original ancestors of all modern day sheep. It originated on the islands of Corsica, Sardina, and Cyprus, but has recently been introduced in much of Europe. Like most wild sheep, the mouflon lives in mountainous terrain, usually above the tree line or in mountain meadows. In Corsica it lives on steep-sided rocky peaks, where it is protected from predators.

It has a red-brown color with a dark area along its back, and lighter colored side patches. Its underparts are white as well as the bottom half of their legs. It has a white muzzle and white circles around its eyes.

The males and females have horns, but those of the males are larger. The curved, spiral horns are usually around 25 inches in length and are arch back over its head. The mouflon's horns don't flare out at the end as most wild sheep's do. The size of a male mouflon's horns determine his status in the group.

A mouflon is about the size of a medium sheep with a weight range of 55-120 pounds. They are 4-5 feet long, and stand about 2-4 feet tall at the shoulders. They have a rough coat, and during the winter grow a woolly under coat that keeps them warm.

The males and females live in separate groups and only come together during mating season. The ewes will usually have the better foraging grounds because their health is more important for reproduction. Mouflon mate, or go through a rut, in late autumn to early winter. The rams' dominance is determined by his age and the size of his horns. They will crash their horns together to re-enforce dominance. The ewes don't mate until they are about 2-3 years old. Males don't mate until they are about 7 years old because they have to establish a strong social standing before being allowed to mate with a female. The ewes are pregnant 210 days and can give birth to either one, or twin lambs. The ewe will go into cover to have her lamb which is up on its feet within minutes after birth.

The mouflon's diet is tough. Being a herbivore, it grazes on short grasses, heather, and shrubs. It has a multi-chambered stomach with special microbes that break down the cellulose of the plant cell walls. After it has eaten its fill, the mouflon will lie down somewhere, and regurgitate its food, chewing it a second time to soften it some more. It then swallows it again for the last time.

Natural predators like bears and wolves have all but disappeared from the mouflon's range. Eagles can pose a problem for young lambs, and the mouflon is still hunted for their trophy horns. The mouflon is a shy animal which feeds mostly at night and doesn't stay long in one place.

Over the last 50 years the mouflon numbers have fallen due to habitat loss, hunting, and interbreeding with domestic sheep. Sardina population dropped to 700 in 1975, but appears to be making a low comeback. Corsica has about 200-500 mouflon and Cyprus has even less. These island populations are listed as vulnerable by the World Conservation Union (IUCN). This means that there are restrictions on hunting, or trapping the mouflon to sell in the wild. Introduced herds on the mainland are thriving, however.