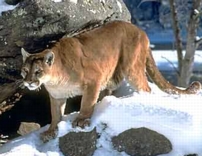 The puma is all one color. It can vary from silver gray, to tawny to reddish. It is lighter colored around the face area, with white around its whiskers and mouth. The males can weigh up to 200 pounds. They have large feet and their hind legs are longer than most of the cat family. A puma can't roar like a lion or jaguar. Instead it makes a screaming sort of sound.

The puma is incredibly adaptable to its environment. Although the preferred prey of the puma is deer, it will also eat insects, birds and mice. It will kill and eat any small to medium sized animal. It has a habit of scraping leaves over its kill to hide it. It will stay in the area and feed off the kill for several days. The puma won't eat anything another animal has already killed however.

The geographic range of the puma is very large. It can live in the cold needle leaf forests of North America and the rainforests of South America. It has been found in the chaparral of the California coast,the Sonoran Desert, and as high as the Andes Mountains. It no longer inhabits eastern North America because its habitat and deer population became too small. Pumas tend to be larger farther away from the equator. Tropical puma are much smaller than the puma in the western United States.

Pumas mate usually in late winter and early spring. Most litters in the United States are born between April and September. Both males and females become sexually mature by the age of two years. Males and females only come together to mate. Two to three kittens are born after a 3 month period. The mother raises them on her own, and teaches them how to hunt. They leave the mother when they get to be 1 1/2 years old. Pumas live to be 15 years in the wild, but captive puma have lived to be 20 years