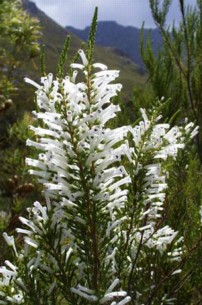 A lovely plant commonly known as the Prince of Wales Heath with the genus of Erica and the species perspicua makes its home in the Fynbos Mediterranean biome. This biome is foundon the southwest tip South Africa at latitudes 33° to 35° South, and longitudes 17° to 20° East.

The Fynbos Mediterranean biome is not full of thick underbrush and forest, even though the forest like evergreen tree is the most common plant in this biome. Fires burn throughout the biome, which is an important reason that Fynbos plants survive. Fire clears any thick underbrush that may stop small plants from growing. These fires are naturally and humanly made. Plants need the space to grow where the underbrush would be. This biome's plants also grow in acidic soil.

January is the hottest month in the Fynbos biome, because it is in the Southern Hemisphere. The Prince of Wales Heath blooms and grows from January to May. May is one of the wettest months, November is the other. Rain normally falls in the colder, winter months, May through July. Summers are long and dry. The average temperature in January is twenty-two degrees Celsius and in July is thirteen degrees Celsius. The average precipitation in the biome is six hundred fifty two millimeters per year.

The Prince of Wales Heath can be from twelve inches tall to six feet tall and is a bush like tree shrub. It grows upright and out to the sides like a bush. It can be up to three feet wide.

The leaves of Erica perspicua are a lot like an evergreen's. They have a needle like width and are one eighth to one half of an inch long. The leaves are gray green, hard and prickly.

Flowers on the Prince of Wales Heath are tubular and flared out at the tips, shaped somewhat like a bugle. They are one half to three fourths of an inch long and have a thin width. The flower's color can be rose pink, white, pink and white, and red and white. These translucent flowers grow in spike like, loose bunches at the end of stems. They can be up to three inches

long. The flower bunches are scattered around the plant on the ends of many of the stems. When the seeds are in the ground, not all of them will grow into a flower. These seeds can grow at any time of year.

The Prince of Wales Heath cannot stand up straight when there is too much water on the roots. The roots are shallow and fibrous. They never run very deep.

The Prince of Wales Heath has adapted so that it can live in an area with naturally occurring and controlled fires, dry summers, and winter rain. Other adaptations are in the root system in that they can survive dry summers by storing water. The plant will not take total dryness or extreme ground wetness such as flooding.

The species Erica are the most common in the Fynbos Mediterranean Biome, so the Prince of Wales Heath is most likely not endangered. Other reasons why the Prince of Wales Heath is not endangered are that the plant has adapted to the biome. Bees are attracted to this plant, so they pollinate it and help it to grow and reproduce. Also, not many hungry, trampling, large game

animals live in the Fynbos biome, so the plant has a very slim chance of being eaten or trampled upon. The plant is also protected. The plant's protectors are people, who watch its growth, learn more about it, and are aware of the Prince of Wales Heath's needs. Special areas are reserved for biome plants such as this one. Three organizations involved in its protection are Mont Eco Nature Reserve, Nautilus Bay Coastal Reserve and Fernkloof Nature Reserve.

This beautiful, flowering plant in the Fynbos Biome deserves to be protected and has many unique characteristics that are important to its survival and its hardiness. We should learn more about the Prince of Wales Heath in order to understand how it grows and enjoy its beauty.

"Countries in the Region." Encyclopedia of World Geography. 1994 ed.