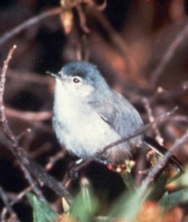 The coastal California gnatcatcher is an endangered bird which only lives in the narrow coastal strip of sage scrub of the California chaparral. It can be found from southern Ventura County down to Baja California, Mexico. The California coastal chaparral is an endangered ecosystem. The winters can be cold and humid, while the summers are hot and dry. The average annual rainfall is between 6 and 20 inches.

The coastal California gnatcatcher is a small blue-gray songbird which measures only 4.5 inches (11 cm) and weighs 0.2 ounces (6 grams). It has dark blue-gray feathers on its back and grayish-white feathers on its underside. The wings have a brownish wash to them. Its long tail is mostly black with white outer tail feathers. They have a thin, small bill. The males have a black cap during the summer which is absent during the winter. Both males and females have a white ring around their eyes. It belongs to the old-world warbler and gnatcatcher Sylviidae family.

California gnatcatchers breed from February to late August, but most of the breeding occurs between mid-March and mid-May. It protects a territory of 5 to 49 acres (2 to 20 hectares) during breeding season. Most of the nests are built less than 3 feet (1 meter) off the ground. It takes about 14 days to incubate the eggs. The young birds fledge, or leave the nest, at 8 to 13 days. They are dependent on their parents for three to four weeks, but may stay with them for several weeks more.

With populations of the coastal California gnatcatcher declining rapidly, it was listed as threatened in 1993 under the Endangered Species Act of 1973.