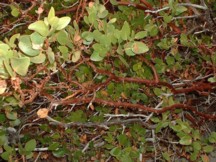 Mariposa manzanita is a native perennial shrub of the California Sierra chaparral. It is found in the foothills and montane regions of the Sierra Nevada and the northern Coast Ranges at elevations ranging from 250 to 6,500 feet. Growing on open hillsides and along the edges of central oak woodlands and ponderosa pine forests, it likes dry, well-drained, and sunny sites.

Mariposa manzanita grows in Mediterranean climate types with warm, dry summers and rainy winters. They can tolerate a fair amount of water for the first two years of growth, but will die if over-watered as mature plants.

Mariposa manzanita is one of over 60 different species of manzanita. Its long, twisted, and smooth maroon branches stand out strikingly against its grey-green evergreen leaves. The young twigs are a pale green and are covered with downy hairs. The shrub usually ranges from 6 to 12 feet in height, but in favorable conditions, it can become a tree of over 20 feet, and develop a thick trunk. Most of their growth occurs in May and June and stops in mid-July when the weather becomes too hot.

Flowers of the mariposa manzanita are heather-like in shape. They can be white or pink and hang in drooping open clusters, and flower from February to April. Mariposa manzanita regenerate by seeds. It fruits in early summer and the seeds ripen in the fall. The fruits are berry-like drupes, which stay on the branch all year round. They are white in early summer and turn a deep red in late summer. The seeds have a thick endocarp and will not germinate unless burned by fire. Manzanita produce seeds every year. 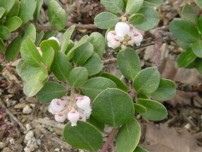 Animals that eat the seeds are the main source of dispersing them. The fruits are eaten by coyotes, foxes, and many species of birds. The foliage is not eaten by deer except during hard winters. Young seedlings are eaten however.

Manzanita has been used to treat mild urinary tract infections, kidney inflammations, and water retention. It contains arbutin, which gives it disinfecting qualities.

Natural periodic fires have burned separate portions of the chaparral throughout history. Since people started building houses in the chaparral, these fires have been suppressed. Manzanita cannot regenerate unless the seeds are scarified by fire and the thick endocarp is burned off. Many manzanita have now reached the end of their life cycles without newer generations replacing them, changing the character of the chaparral. Old growth manzanita also poses an even greater risk of giant, out of control fires because of the amount of leaf litter and dead wood on and around them. In trying to prevent fires, many communities have merely increased the risk of even greater fire damage. Some communities have started programs of controlled burns to reduce the dead wood and regenerate the manzanita chaparral.