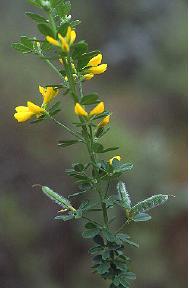 French broom is found in the Pacific Northwest and Northern Canada on the American continent. It is native to the Mediterranean region and Azores Islands. It probably got its name because of the way the branches grow. They were actually cut and made into brooms at one time. In many places it is considered a weed. It spreads quickly and grows in dense stands that crowd out native plants. French broom is also used as erosion control on dunes, and along highways in the mid 1900s. Soon they escaped gardens and highways and invaded their environment. French broom is considered to be the most aggressive of the Brooms.

A bushy plant, French broom can grow 5 to 8 feet tall, and has many twisted, single, green branches on it. The branches look almost bare because the leaves are very small, only about 1/2 of an inch.

Small pea-like yellow flowers bloom along the stem in twos or threes between April and June. With each small flower are three green leaves which are about the same size as the flower. It grows its seed in hairy green pods, just like peas. French broom actually belongs to the pea family. The seeds and flowers of brooms are slightly toxic and can cause stomach cramps and indigestion.

If you take Scotch broom flowers and soak them in water overnight, the flowers would lose all their color and the water becomes a yellow dye.